Anthologies
» Dressed to Kiss
» Seduction on a Snowy Night 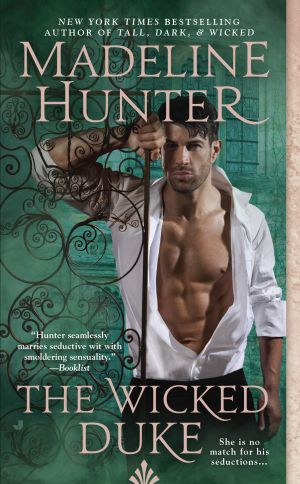 Third in the roguishly intriguing series by the New York Times bestselling author of Tall, Dark, and Wicked and His Wicked Reputation...

She appeals to his wicked inclinations, but he never expects she might snare his heart....

Suspected of his brother's murder, Lancelot Hemingford, Duke of Aylesbury, was forced to give up his hell-raising habits in London for the anonymity of quiet country living. So, when an opportunity arises to clear his name in exchange for proposing to the niece of a neighbor, he sees no choice but to accept. Plus, seducing the reluctant maiden will be a most intriguing challenge...

As Marianne Radley is dependent on her uncle, she must accept the Duke's marriage proposal at her family's request, despite her belief he is irredeemably wicked. But along with marrying him, she intends to sniff out the duke's unsavory secrets and expose them to the world: a plan that would be flawless were it not for one minor detail—even she, with all her determination, is not immune to the charms of a rakish duke...

Excerpt from The Wicked Duke 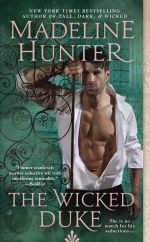 Lance spent the next fifteen minutes telling Miss Radley all about Ives and his new bride. By the time he finished, they were at the lake.

His property line ran down the middle of it. For decades both owners had allowed anyone to row or swim here, and in summer one could always find people about. On this wintery day it was deserted.

“Let us take a turn along the water’s edge,” he said.

Miss Radley glanced at her cousin. “I should stay here.”

“The carriage is warm, and she has the blanket. The coachman will remain with the equipage. She will be safe.”

Miss Radley turned to her cousin. “Nora, I am going to take a short walk. Do you want to come along?”

Nora shook her head. “I will be fine here, just as the gentleman said.”

Overcoming her hesitance, Miss Radley allowed him to hand her down. They walked through the grass to the lake’s edge.

“It looked bigger when I was a girl.”

“Isn’t that always the way it is. When I was fifteen I realized it was small enough I could easily swim across, although it looked like an ocean when I was a child.”

They strolled along the bank. “When you said you would call on me and demand a carriage ride, I did not think you meant it,” she said. “As you can see, Nora is not grateful for the opportunity.”

“I am sorry she was obligated to join us. I would have been glad for your company alone.”

Such subtle flirtation did not come naturally to him. Since she did not so much as blush, he must have been very subtle indeed.

She frowned. “Are you very sure you do not recognize her?”

“Most sure. You seem to believe I should, however.”

“Miss Radley, if your cousin says we met, no doubt we did. I will be honest and say that even if she says I flirted with her, perhaps that is true. I confess that I do not remember all the girls I meet or flatter.”

“No doubt you will forget me soon too.”

“I did not say that, nor should you think it. A passing smile or flattery is not quite the same as calling on a woman.”

She glanced back. Their stroll had taken them along a curve that removed them from view of the carriage.

“Let us row out a bit, unless you are too chilled.” He coaxed her toward one of the rowboats resting along the bank.

If ever a woman were of two minds, this one was. She followed, however, and climbed into the boat. He pushed it off, and jumped in, then sat and took the oars. With a few strokes they were away from the bank.

Free of the overhanging tree branches, the late afternoon sun bathed them in its warmth. She untied her bonnet’s ribbons, and removed and set it on the bench beside her. “It is very lovely here. So peaceful and quiet. I wish Nora had come with us.”

He set the oars up, and let the boat drift. “I am glad she did not.”

She looked lovely, awash in the gold of the sun’s rays, surrounded by the deep blue of the lake. Her copper hair appeared on fire in places, as the sun set strands ablaze. Her wide mouth did not smile, however, and her deep blue eyes watched him cautiously.

“Why did you call on me? What is it you expect?” she asked.

If he were good, which he never had been, he would say something reassuring. He might even pretend to be wounded by her apparent suspicions. Since he was bad, wicked even, he did not bother.

“Surely you know. You may be innocent, but you are not ignorant.”

Well, that was blunt.

She had asked, however. She should not be vexed that he answered honestly. Yet she was. This man was so conceited that he assumed she would not mind such a bald allusion. Perhaps he saved more subtle words for better women than she.

“I am very ignorant as to your intentions in this boat right now.”

He regarded her at length. She wished that did not affect her. He was not a man whose attention a woman could ignore, however, or remain immune to. At least not this woman. She suspected her susceptibility had much to do with never having had such attention before, from any man.

Respectability plus no fortune equaled no male interest. It was an equation she had learned quickly, and made her peace with.

“My intention is to claim the kiss that you owe me.”

“You promised one if I shaved.”

“I did not. I have reviewed that meeting at length, and I only said that perhaps, if we were introduced, I might dance with you if you shave. I said nothing about a kiss, nor did you even ask for one.”

“I remember it differently.”

“Your memory is faulty on many counts, Your Grace, so I am not surprised it is on this one.”

“Please do not address me like that. Call me Aylesbury.” He smiled. “I will call you Marianne.”

“No, sir, you will not. I will not accept such familiarity.”

“And I will not accept the formality of addressing you as Miss Radley, especially since another Miss Radley sits in the carriage.” He leaned forward. “I will call you pretty flower, until you think more familiarity is acceptable.”

It might be wiser to allow him to use her given name, rather than suffer this endearment. She tried to form a terse rejection of both, to no avail. The words kept scrambling. Lack of experience made her utterly incapable of handling this advance with anything resembling sophistication.

His position, with his arms on his knees, brought him very close to her. To her astonishment, he reached out and took her hand. The warmth of his touch flowed right through her glove, and up her arm. Then it kept going, as if he heated her blood.

He began removing her glove. She watched, mesmerized by the intimacy of the small act. His fingers slid along her skin as they coaxed the glove down, bit by bit. His devilish slow disrobing of her hand caused his fingertips to keep skimming her inner arm. Her breath caught, and a shiver slid from her neck to her stomach.

He drew off the glove completely, and held her hand in his, skin on skin. “You will not allow me to kiss you on the lips, I am sure. But this is not dangerous or scandalous. If we had been introduced differently, I would have done it right in front of your uncle.”

With that, he bowed his head over her hand, and kissed it.

Only it was not the kind of kiss a man might make to a lady’s hand upon an introduction. Not a mere brushing or peck. He kissed her hand. Slowly. Seductively.

He hovered so his breath warmed her skin. Chills danced up her arm.

He pressed warm lips, then moved them so his mouth caressed her. She watched, mesmerized by the sight of his ardor, and by the effect it had on her. A new alertness affected all her senses. It felt like time had slowed to allow him to kiss at his leisure.

He turned her hand palm up, and kissed yet more. Prickly signs of arousal stirred in her stomach, astonishing her. Parts of her body that she rarely noticed came alive with sensations.

He gently nipped each fingertip. Each delicate pressure sent delicious shocks up her arm. Finally, he bit the pad at the base of her thumb. A scandalous pleasure tensed deep inside her.

The warmth of his lips edged over onto her wrist’s pulse, and the sensation exploded.

She started, and pulled her hand away.

He looked at her. Not surprised. Not annoyed. He just waited while he watched her.

Her mind strove to form words to scold him, but her embarrassment would not allow them to form. Self-reproach for permitting such liberties came together neatly, however.

After one last, deep look into her eyes, he took the oars and began rowing again. It had been a knowing look, too honest in reflecting what he saw—a woman who had not resisted soon enough, considering what he had done.

When they arrived at the lake’s bank, she clamored out of the boat and strode toward the carriage. She replaced her glove on her hand with difficulty, since she also carried her bonnet.

His boots fell into place beside her. “You can reprimand me if you want.”

“And continue to be the lord’s fool? I will only scold this far. You are not to do that again. Nor do you need to call again, since you have had the kiss you say I owed you, even though I owed you nothing of the kind.”

“I think you may be right about that. I believe, now that I remember, that it was indeed a dance at the next assembly, as you claim.”

“You are impossible, and very bad. I know all about you. I knew even when I was a girl, and I can see you are even badder now.”

“I do not think badder is a word.”

“Should I say wicked, as everyone else does?”

“It has a certain flair to it, while bad is a word so often used as to be boring. It is applied to all sorts of ordinary things. The food has gone bad. He had a bad fall. Wicked, however, is always about a person at least, and much more precise.”

Between her embarrassment, and his teasing, she was flustered and at wits’ end by the time they arrived at the carriage.