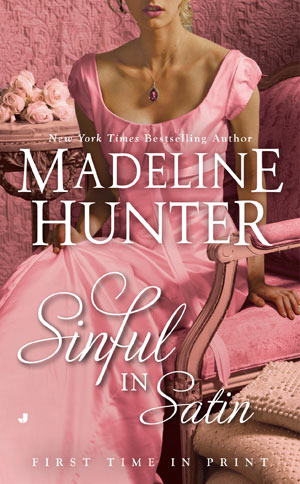 "A master storyteller, Hunter easily lures readers into the web she spins, leaving them completely satisfied from beginning to end." —RT Book Reviews

"Hunter deftly sifts intrigue and exquisite sensuality into the plot of the third book in her exceptionally entertaining Rarest Blooms quartet." —Booklist

When famed London courtesan Alessandra Northrope passes away, her daughter Celia Pennifold inherits little more than a hopelessly contaminated reputation, a house in a middle class neighborhood, and an education that prepared her to take her mother’s place the way Alessandra intended. Celia hopes to make her own life on her own terms, however, and moves into the house only to discover one more legacy—an enigmatic, handsome tenant who knows her mother’s plans for her future rather too well.

Jonathan thinks he is on a simple mission to discover whether Celia’s mother left accounts of her lovers that might embarrass important men. Instead he finds himself embroiled in a mystery full of dangerous betrayals and secrets, old and new, that touch on his life as well as Celia’s.

Excerpt from Sinful in Satin 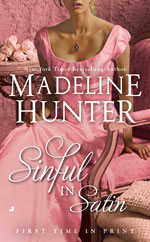 Boot steps sounded in the stairwell, getting fainter as Mr. Albrighton carried his water to his chamber.

Celia had hoped that upon realizing she would do nothing to make him comfortable, Mr. Albrighton would take himself off to someplace where at least basic service would be provided. Instead he had not appeared to mind doing for himself this morning, and had continued to show more interest in her than was proper. He had also deliberately engaged her in conversation, as if to prove he could.

She suspected that if she were too obvious in her efforts to encourage his removal, he might deliberately stay. He might decide it was contest that he of course had to win. She probably had achieved nothing by being rude this morning, and perhaps had only goaded him on in his plan to dally. A little more subtlety might be in order.

She did not like being rude and, she suspected, she had not even been very good at it. She certainly had not held the pose once he entered this sitting room. But then it was hard to act like a person hardly existed when that person made one’s blood race when he stood right next to you and his mere breath sent delicious shivers down your back.

She pictured him up there, waiting for that cold water to heat in a small attic chamber. How long had he been using that room while in London this time? Not long, she guessed, if he did not even have linens for his bed and washing.

She set aside her sketch and went up to her own chamber. She pulled cloths out of the wicker linen chest and made a stack of sheets and towels. She needed to protect whatever mattress was up there, after all. Nor did she want him dripping water all over the floor. Giving him linens was not actually accommodating his presence in this house, or acting like his servant. If she made him live like a prisoner, however, that chamber would eventually be as fetid as a prison cell.

She did not actually tip toe up the front stairs to the attic, but she tried to make no noise. She would leave the linens outside the door and be gone before he knew they were there.

The attic had a long passageway. Three doors gave off one side, and two off the other. Three of the doors were open. She listened for any sounds coming across those three thresholds.

Nothing. Treading softly, she aimed for the other end of the passage, where two closed doors faced each other. As she passed the open chambers she glanced in. All were furnished with simple beds and wardrobes. If she were of a mind to have more tenants, there was space enough for them.

She approached the top of the back stairs. As she did, she realized that one of those doors was not totally closed after all. A beam of light fell into the passage, indicating it was ajar. Cold air flowed out of it too. No noise, however. No movements.

Angling her head she spied around the door jamb. For the briefest instant her gaze took in the open window and a desk piled with papers and books. Then Mr. Albrighton completely arrested her attention.

He stood with his back to her, facing the window, naked to the waist and with his hair still unbound. She followed the tapered line from his shoulders to his hips, captivated by the honed, lean strength that had been hidden by garments.

His arms extended straight out from his body on either side. In each hand he grasped a massive, heavy book. His muscles had hardened from the stress of holding those books into tight, defined, masculine forms, as crisp as if chiseled by a sculptor. His hands displayed an alluring strength as they reacted to the weight they bore.

She forgot her intentions to drop the linens and scoot away. She forgot everything while she watched him, fascinated. How long had he been standing like that? How long did he intend to continue? The books must grow heavier with each passing moment. They were of good size and probably close to twenty pounds each to start.

He slowly raised both arms until the books met over his head, then slowly, painfully, lowered them again. The muscles in his shoulders and arms chorded in resistance. Then those in his back, and even, perceptibly, the ones in his hips. Even with the window open and the cold entering, a fine sheen of sweat showed on his skin.

He looked magnificent. Beautiful, really. She flushed deeply, thoroughly, in ways the cold breeze could not cure. Twinges of arousal moved in her like strings on an instrument were being mischievously plucked.

He raised the books once more. They began their descent. This time they did not stop but continued the arcs until he held them down by his thighs.

He saw her. She had moved to get a better view through the opening. He looked right at her and it was clear he knew she had been watching him. And why. Dark amusement showed in his eyes along with a dangerous awareness that she was bedazzled. She practically heard him debating what to do about that.

She forgot to be embarrassed. Forgot how to speak. She just stood there holding the linens, looking at him because she could not look away. The same strength showed in his chest, and even now, with the stress of the books relieved, his body possessed those tight, hard lines.

“You are allowed to come in,” he said. He dropped the books on the bed. She saw that it had a blanket at least. “It is your property.”

“I—I brought some—“ She lifted her arms.

He made no effort to come and get them from her. He just stood there, half naked, watching her to see—what?

She collected herself enough to pretend more composure than she felt. She stepped over the threshold and dropped the stack of cloth on the bed. “You will have to make the bed yourself, though.”

She should leave now. Run for her life. Only he stood a mere foot away now and, dear heavens, he was something to behold. She felt he had pinned her in place with some invisible power that sapped her ability to will her legs to move.

She made a display of gazing around the chamber like the property owner she was, but his body was never really out of sight. Again she noted all those books and papers. This time she also saw the pistols. Three of them, lined up on the desk along with the implements to clean them. What could one man need with three pistols ready for firing?

He noticed her interest. “They are not loaded.”

“I suppose that is good to know. I thought perhaps you planned to kill someone.”

He was teasing her. She hoped. Maybe not.

He seemed to see the question in her. “I am not dangerous to you.”

She was still flustered enough to respond too pointedly. “Aren’t you? I think you are.”

“I suppose I am.” He gestured to the pistols. “But not in that way.”

No, not in that way. She struggled to shake off his power, so maybe he would not be dangerous to her in any way right now. It felt like lifting herself, hand over hand, up a dangling rope.

“You should have thrown on a shirt when you saw me,” she said.

He stepped closer. She would have jumped out of her skin if she could move. Fingers on her chin now. Firm ones, a little rough, holding her and dark eyes looking into hers deeply. Too deeply. Warmth and too much knowing in his gaze, beckoning in a subtle but ruthless seductive lure.

Her cheeks quivered from the contact of his hand. A hundred tiny thrills flowed through her skin and down her neck. She could only look up at him, at those dark eyes so close to hers. He was going to kiss her, she was sure. She should back away and cast him off. She should—

His hand left her. He stepped over to the fireplace and lifted the bucket of water. “You can stay if you like. Or you can run away if you believe you must.” He poured the water into the wash bowl. He looked over his shoulder at her. “I should warn you, though. If you are still here when I finish with this, I will not let you leave soon after.”

Finding a shred of sense, she left. Not soon enough, though. Not before she saw the way the sodden cloth he used to wet his skin sent rivulets of water snaking sensually over those muscles.