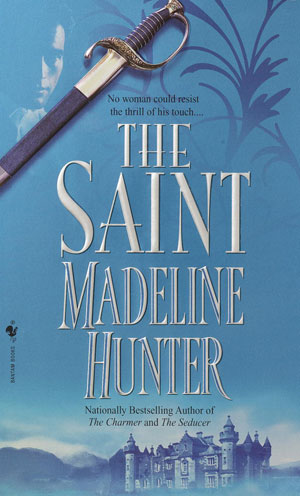 4 1/2 Stars, Top Pick! "Her deep knowledge of the human heart is what makes her a superb storyteller. Hunter is a writer who compels, fascinates and captivates; you have everything you read historical romance for right here." —Romantic Times

The world thinks he is a paragon. A saint, by Zeus. If only they knew!

Vergil Duclairc is a man used to getting his way. As the newly appointed guardian and trustee of Miss Bianca Kenwood, he is determined to find her and bring her back to live with his family. The last thing he expects is to find his errant ward scandalously costumed and employed as a theatrical singer. He is even less prepared for the relentless attraction he feels for her, a desire that he cannot pursue lest it unmask secrets that he must hide, and unravel plans laid long ago.

Bianca has no interest in giving up her independence, but there is something compelling about this handsome and brooding viscount who seems to assume he owns her and her inheritance. She soon learns that Vergil is a man of secrets and sensuality, and that she is not immune to his power. Suddenly, in a moment that would change everything, their desire ignites and throws them into a scandalous passion, and into a world of dangerous intrigue.

Nationally bestelling author Madeline Hunter has captivated fan with her unforgettable romance novels filled with suspense, seduction, mystery, and love. Her Seducer series features men of depth and action who are members of The Hampstead Dueling Society, who hone their skills with swords and pistols together. For some it is only for exercise and sport. For others it is preparation for the deadly confrontation that eventually comes.

Excerpt from The Saint 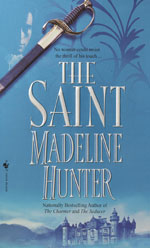 "I still don't understand your impatience," Dante said. He flicked some cigar ash out the coach window. "No reason to drag me back from Scotland. She doesn't come of age for almost a year."

That was an eternity by the way Dante calculated his calendar with women. Normally he would court, seduce, bed and discard two mistresses in that time. Vergil studied his younger brother's beautiful face and limpid eyes and dark brown hair. Dante’s history with females had practically been inevitable with features like that. Vergil had seen ladies of the highest breeding literally lose their breath when Dante approached.

"The season starts well before her birthday, and with Charlotte coming out we can hardly leave Miss Kenwood here while we all pack off for town. You need to be married before then, not just engaged."

"Why? Do you really think some fortune hunter will cut me out?" Dante's tone implied the notion was preposterous.

No, I think that if she is married we can prevent her from going up to London at all if necessary, Vergil thought. The very notion of Bianca Kenwood in polite society, calling dukes and earls "Mister", and announcing that she intends to study performance opera, was enough to ruin his spirits on this late August day.

But Dante's question also pricked at the foreboding that had continued plaguing him since he had left Penelope's house that night. It might best for Dante to get this over while the field was clear.

Dante looked him squarely in the eyes. "We are almost there. Don't you think that you should tell me now?"

"You haven't said much about this Miss Kenwood whom I am expected to marry. I find that suspicious. After all, you have met her. We both know that I have no choice except to agree to this, but if warnings are in order you are running out of time."

"If I have not described her in detail it is because it would be indelicate to do so. This is not one of your racehorses."

"You have not described her at all."

"Very well. She is of middling height and slender, with blue eyes."

Damned if he knew. What color hair had been hidden by that absurd wig?

Vergil had fully intended to warn Dante, but had failed to come up with the right approach. A tinge of guilt colored his reflections while he debated the appropriate one now. After all, he had practically forced his brother into this. Not that Dante had resisted much once he learned that over five thousand a year came with her.

"Is that all? Just like you to get stuffy about a few faux pas, Verg. What did you expect? She is an American. Pen will shape her up in no time."

A few faux pas did not do Bianca Kenwood justice, but he let it pass. "Of course. However, even so, she is . . .distinctive."

"And perhaps a bit . . . unfinished. Which can be remedied, of course. Pen has her in hand even as we speak."

Dante peevishly looked out the coach window at the passing Sussex countryside. Vergil hesitated continuing, but they were almost there and he was running out of time. "She may need a strong hand. She is a bit independent from what I could tell."

His brother's gaze slid back to him. "Independent, now."

"She has certain notions. It is her youth, I'm sure, and they will pass.”

"It would help immensely if you would balance some of this by adding how beautiful she is."

No doubt. The problem was, he didn't know if she was beautiful. He only remembered big eyes, interesting because of that intelligent and spirited spark in them.

What else could he offer? All that stage paint had been obscuring. The possibility of a lovely complexion, but who could be sure until he saw her washed? A nice form, but that might have been the costume. The suggestion of an underlying sensual quality. . . not something one noted about a brother's future bride.

"Damn it, if she is vulgar I won't go through with it, Vergil. Nor should you want me to. Aside from the fact that she would reflect on me and this family, I could hardly avoid her completely once married, even living in town and leaving her out here, which is how I plan to arrange things. And until you marry Fleur, which you are taking your damn sweet time doing, and set up your nursery, I am your heir and this American could end up the Viscountess Laclere."

Vergil did not need his younger brother to list the pitfalls dotting this path. Pits much deeper and more numerous than Dante imagined. A honeycomb of them. If he could think of an alternative, he would use it, but two weeks of debating options always led him back to the same conclusion. Bianca Kenwood needed to be bound to this family with unbreakable chains.

Dante bit his lower lip and again looked out the window from beneath heavy lashes. "The income from her funds will be mine, like you promised? As trustee you will not interfere? And my allowance continues until the wedding, enhanced as we agreed?"

"Of course. I also promise to continue management of the financial investments, as you requested. The income from the funds is secure, but the others require some occasional oversight, and I know that you hate such things."

Dante gestured dismissively. "Sordid and nettlesome things. I doubt they are worth the trouble. Sell them out or hold them, as you judge best. After how you scraped us through when Milton died, I would be a fool to question you."

They rode in silence through the oak and ash forest filling the back of Laclere Park. Vergil much preferred this approach to the broad sweep of landscape facing the front, and always instructed his coachman to take it. Normally it served as a transition space for him, a few miles in which to prepare himself for the role of the Viscount Laclere and the responsibilities that it entailed.

He had first come this way when returning home for Milton’s funeral, choosing the longer route in order to delay that arrival, churning with conflicting emotions and spiking resentments at the changes in his life suddenly decreed by his older brother's demise.

It was in this forest that he had finally accepted the new reality and its attendant restrictions and deceptions. Little had he guessed how complicated his brother’s death would make his life. Along with restrictions, mysteries and deceptions had waited for him at journey’s end.

Dante suddenly leaned toward the window. He squinted. "What the. . ."

"Is something wrong?" Vergil pushed Dante’s head a bit and stuck his own to the opening.

"There, over in the lake. Wait, some trees are in the way. Now. Isn't that Charlotte?"

The trees thinned while they began to pass the lake. Two woman bathed in the water, laughing and splashing. Naked, for all intents and purposes, since their chemises had gone transparent from the water. Hell, yes, it was their younger sister Charlotte, with that maid Jane Ormond.

The water broke and a third feminine body rose up. A soaked chemise adhered to her skin and obscured little. Pretty shoulders . . . tapered back. . . nipped waist . . . graceful hips. . . finally the tops of enticing rounded buttocks slid into view. Long blond hair fanned in the eddies and then sealed to her body in a thick drop from a well-formed head.

Her slender arms began skimming the water's surface, creating waves in the direction of her playmates. The other two squealed and started a massive counteroffensive of splashes, sending sprays of water all around her until she appeared like a vision emerging out of a misty dream.

A shriek of joyful protest reached them. Laughing, she turned to run from the assault.

He and Dante found their sense at the same instant. They straightened and sank back into their seats.

His brother eyed him with suspicion. "Who was that?"

"I can not be certain, but I think it was Miss Kenwood."

Dante closed his eyes and rested his head against the seat's back. "Let me make sure that I understand my position, Vergil. I am required to marry that? I am to be sacrificed on the altar of the god of financial stability and be forced to take as my lifelong partner that female we just saw? A girl so distinctive, unusual, and independent that she bathes almost naked in full view of a road, in broad daylight, and influences our sister to do the same thing? You intend to coerce me, if necessary, by threatening my allowance? She is the bride whom you have chosen for me?"

"Yes." There really was nothing else to say.