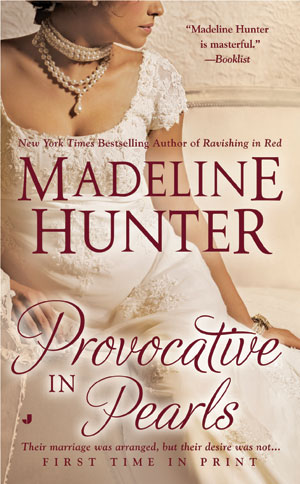 "Hunter gifts readers with a fantastic story that reaches into the heart of relationships and allows her to deliver a deep-sigh read." —RT Book Reviews 4 1/2 stars, Top Pick

When Verity’s past abruptly finds her, her recent behavior promises to unleash the scandal of the decade. Of more concern to her, she now has to outwit fate or be forced back into a marriage to a lord whom she never freely accepted. She never expects for the stranger who is her husband to create so much sensual excitement, however, or for her quest for the life she was supposed to live instead to reveal a conspiracy that endangers them both.

Excerpt from Provocative in Pearls 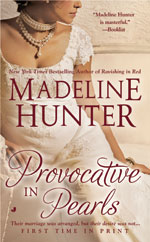 The boots stopped nearby and Verity had to acknowledge him. He had wonderful eyes, as all the women noticed. Had those eyes been dull or shallow, the color would not mesmerize, but they reflected so much instead. Intelligence and confidence and, on better days, humor. There also showed a touch of the arrogance that was natural to a man of his birth and appearance.

She was a normal woman, and not immune to those eyes and that face. He had intimidated her two years ago when, almost broken by Bertram’s treatment, she had all but cowered in this earl’s presence.

The only thing about him that had been familiar to her had been the mastery in his manner. Her father had been like that. But her father had not been such a big man, and so his mastery did not carry the implications of physical power that this earl’s did. Her intuitions about that power had not been good, and his presence had made her want to shrink . . . recede . . . disappear.

She had taken an odd sort of comfort in his face, however. Handsome, to be sure, but not pretty. Not smooth and almost feminine like some elegant lords. It was a thoroughly masculine handsomeness, the kind that might be seen over a forge or in a stable. The strong bones came together with a perfection that seemed more accidental than carefully bred, and the insinuation of disdain was not there the way it could be in other, softer faces.

“Summerhays and Audrianna have suggested that we go to Essex with them,” he said. “Their idea is that some time there might help you become comfortable with the future, and with me.”

“That is kind of them. Also of you, if you have accepted the plan.”

“I am not without sympathy to the shock that you have had in being discovered. If a few days in Essex will ease your distress, we can wait on returning to London.”

He was being most solicitous. She was not sure that was a good thing. If he was too kind, it would all be harder.

“I will be grateful for this sojourn before being resurrected, Lord Hawkeswell. The public curiosity will not be pleasant, and I do not mind putting it off. I wonder if I can make a request about this house visit, however. Since it will be brief, perhaps you will indulge me for these few days.”

Suspicion entered his eyes, and a bit of pique. No doubt he thought he had already agreed to indulge her more than required. “How so?”

“Since this has indeed been unexpected, I would appreciate it if we would put off any wedding night until the visit is over. Perhaps we can use this time to learn what we have in each other, so . . .” She shrugged, and hoped he understood women as well as Celia claimed.

“You play a shrewd hand, considering that you have no cards. I do not mind delaying those rights for a few days as you ask. After waiting two years, it is a small matter. If you think that you are going to convince me to seek an annulment, however, that will not happen.”

How like a man to think he could foresee the future. To think he knew now how he would feel in four days on such an important matter. Once he knew her better, and once he heard her proposal about the money, he would surely be of a different mind.

“I also ask that you not inform anyone about finding me until we leave Essex,” she said. “If we can put off all the gossip for these few days, I can better prepare myself for it.”

“I will agree to both your requests if you also agree to several things,” he said. “First, you must promise not to run away and disappear again tonight.”

That was easy to accept. There would be no point in running away with him so close on her trail. Besides, she had things to do, and she could not do them if she went into hiding again.

He stepped closer and looked down at her. His proximity emphasized his strength and her disadvantage in ways that she felt viscerally.

“I require that you accept one other term in this bargain, Verity. I will not expect my marital rights if you willingly accept three kisses a day.”

He surprised her. It would be much better if they did not do that.

“What kind of kisses?”

“Whatever kind you will permit.”

“Very brief ones, then.”

“Other than the kisses themselves, I will expect nothing more.”

“They must be private. I do not want to kiss in front of Audrianna.”

“I promise that they will be private.” He smiled a little when he said it, as if he understood why she wanted that. She thought that was a good sign. It was the first smile of the day too. She had to admit that he had a nice smile, one that brought lights to his eyes and made his face much friendlier.

“If they will be private and brief, I will agree to three kisses. I do not know why you want them so soon, and every day, however.”

“Then we are decided,” she said. “When does Lord Sebastian think to leave for Essex? Today? If so, I should pack my belongings. It will not take long.”

“Tomorrow. He and I will go to an inn tonight, and bring his carriage in the morning.”

She nodded her acceptance, and went back to piercing the soil around a lemon tree with her auger. He did not leave as she expected, but stood there, two feet away, watching her.

“Verity, I will have one of those kisses now.”

She straightened and faced him. “We are not yet in Essex.”

“I did not say they would wait for Essex. You can spare one today, I am sure. This has not been a reunion designed to put me in good humor, and you are smart enough to know that I did not have to agree to this plan, and could have much more than a kiss if I chose.”

There it was again, that frank statement of his rights and her lack of power. A shiver of an old fear flexed through her before she could stop it. It would probably always be thus. A woman should at least be truly willing, and have an honest understanding, before she was put completely under a man’s authority and subjected to the whims of his humor.

She suppressed both the fear and the rebellion that usually accompanied it now. He had given her no real cause to react this way. It had not been a reunion to please a man, or a discovery that flattered this one. Yet he had been more amenable to this house visit than he had to be.

“You are correct. One kiss today is the least I can do to thank you for the restraint you have promised to show.”

He found that slightly amusing, but perhaps not in a good way. He moved very close to her and, with firm fingers, tilted her chin up. The contact felt strange, and a little dangerous. She was not accustomed to being touched by a man, skin on skin, even in this simple way.

He gazed so deeply that she grew uncomfortable. She closed her eyes, braced herself, and prepared to step back after the briefest touch of their lips.

“Have you ever been kissed before?” he asked.

“Years ago, when I was a young girl.” A vague snip of memory drifted into her head. She saw Michael Bowman’s crooked smile before that first kiss. A deep sorrow twisted her heart.

“How many years ago?”

“There is the possibility that you did not run from me, so much as run to another man.”

The suggestion alarmed her. “There is no man here, as you can see.”

“That you are here, and there is no man, does not mean you did not leave because of one.”

He did not give her a chance to respond. He tilted his head and touched his lips to hers.

She had no specific memory of the physical parts of that girlish first kiss, other than it had made her want to giggle. Certainly it did not prepare her for the oddness of this intimacy, and the way he suddenly dominated her senses. There was firmness in his mouth despite the velvet pads of his lips, and control in that hand beneath her chin even as it held her gently.

She became aware of how little space separated their bodies, and how his scent encompassed her along with something else that came from him, something invisible but almost tangible. There was too much of his presence in that kiss, and much of it came from within rather than from his physical existence.

She did not suffer it long. She allowed little more than a mere brushing that created an odd tingle, and a slight pressure that she resisted. She stepped back quickly, freeing herself from that careful hand.

He looked at her with deep consideration for a moment, then turned away.

“Until tomorrow, then, dear wife.”