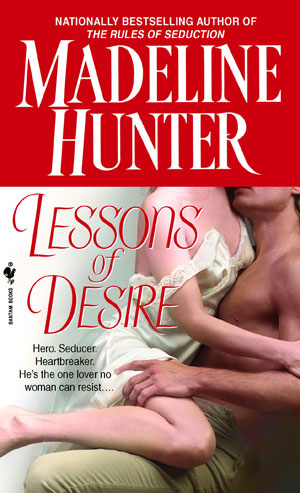 "Hunter scores again with well-rounded and appealing characters, as well as a riveting story." —Booklist

"She has an inherent understanding of the drama in life that enables her to craft intelligent characters and strong plotlines into powerfully emotional romances. You'll simply fall in love with this one." —Romantic Times 4 ½ stars

If Phaedra Blair did not possess both style and beauty, the world would consider her merely strange. Since nature had blessed her with these qualities, society thought her almost interesting.

He first appears beneath her prison window as her savior—a sinfully attractive man whose charm and connections have ensured her release from an unjust arrest. But author and publisher Phaedra Blair quickly learns that the price of her "freedom" is to be virtually bound to her irresistible rescuer.

Learn about the making of this trailer

Learn about the making of this trailer

Excerpt from Lessons of Desire 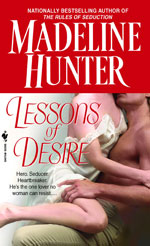 Phaedra left a note and some money on her portmanteau, to ensure Signora Cirillo understood she would soon return for it. Then she slipped out of her apartment and into the dark corridor. She felt her way to the stairs. Light of step, swathed in black, she eased down the stairs to the next landing.

She felt her way blindly through the dark to the next set of stairs.

Suddenly the shadows took on forms of banister and doors and walls, as if someone had opened shutters to the moonlight.

"Pietro is not waiting at the crossroad the way you think, Miss Blair."

Her heart fell at the calm, quiet, voice behind her. She pivoted.

Lord Elliot stood a yard behind her at an open door that gave in to the apartments directly beneath her own. He was naked to the waist and barefoot, as if he had been sleeping and thrown on trousers to investigate a disturbance. Dim lamplight from his chambers washed him in a golden glow.

His presence heralded the destruction of her plan of escape. Despite the exasperation building fast, she could not help appreciating the body exposed to her gaze. He had a fine form, broad shouldered and lean. His body possessed the youthful tautness that blessed men for so long in life if they remained active. The dim light emphasized the hard muscles of his chest and stomach and arms.

He took two strides, relieved her of the valise, grabbed her arm, and pushed her into his room. He closed the door.

"What are you doing here?" she asked. The lamplight really flattered the hard chest and alluring skin so close to her face. If his interference had not disheartened her she might enjoy looking at his beauty.

He did not move for a long count. She glanced at his face and found him watching her.

He had noticed her looking at his body. A low arousal hummed in her blood. His eyes reflected the same reaction, only with cool consent, as if he controlled it in both himself and her.

Yes, this man would be nothing but trouble.

"Do not move. Do not attempt to leave." He strode to the writing desk, picked up his discarded shirt, and drew it on.

She did not watch. Not really. But out of the corner of her eye she saw the way his limbs moved and his torso stretched. That image from the afternoon invaded her head again, more vividly this time, of his face above her and those shoulders and chest under her caress.

She could see evidence of his inhabitation out of the corner of her eye too. The lamp stood on a writing table in this sitting room. A pile of papers did too. She noticed the ink stains of his fingers. He had been writing, not sleeping. She pictured him there, stripped to the cool night air, intent on his prose.

Dressed, barely, and looking too rakish and romantic for safety in that loose shirt, he faced her.

"Lord Elliot, did you move yourself here to spy on me?"

"I left the spying to Signora Cirillo. I moved here to stop you from slipping away in the dead of night."

He had guessed her plan. That discouraged her. "Involving that harpy in my private affairs was inexcusable."

"It appears it was necessary. She relished her mission and performed with initiative. I merely asked her to inform me if you disobeyed and left the hostel. Instead, she followed you and intercepted that letter to your friend." His expression turned critical. "That you tried to arrange this midnight assignation with a man is intolerable. Even worse, what if your Pietro had not waited at the crossroad? You would have been out there in the night, in this city of all cities, unprotected—"

"Do not scold me. Do not dare. If he had not come I would have found a fast way to hire a carriage or a wagon or a donkey if need be, and I would be gone." The full implications of this sorry episode had lined up in her mind. She resented every one of them.

"It appears that I have traded one gaoler for another," she said.

He lifted her valise. "Call it what you will." He swung his arm to the door, inviting her to lead the way.

Simmering with anger, she trudged back up the stairs to her apartment. To her horror he did not drop the valise inside the doorway, but carried it into her bedchamber. She did not follow. An intuitive caution, a very womanly one, kept her in the sitting room.

His command caused a rumbling in her that she did not recognize or like. The anger it contained was understandable, but it also held other pulses and throbs that dismayed her. She hated when men tried to dictate to her, when they presumed to be her master, and yet. . .

She peered into the bedchamber. He stood there in dishabille, his white shirt open at the collar, his hair mussed and his expression set with resolve. He noticed her and that wordless acknowledgment passed between them. Tingles of thrills and danger scurried through her.

He walked over and pulled her into the room. His hold on her arm, so firm and confident, so full of assumptions regarding his right to do as he pleased, stunned her. Never in her life had a man treated her like this. She tried to collect herself and form the words to put him in his place, but—

He untied the knot of the shawl beneath her chin. It took far too long. It brought him much too close. Surely he was not such a rogue as to— She should stop him and do it herself. She should—

He slid the shawl off her head and shoulders. It fell in a long, slow, caress. His gaze followed the edge slip over her body until it hung from his hand.

Only moonlight from the open window lit the chamber, but she did not have to see his face clearly to know his thoughts. They were just there in the room, in the air, as they had been in the afternoon.

A new reaction startled her. Another one that she had never experienced before. She was afraid. Not of him, and not of being forced. Of herself, and of the peculiar, shocking way her body responded to how he played her master.

He gestured to the bed. "Remove your dress and lie down."

That almost snapped her back to her senses. Almost. An inexplicable excitement twinged low and scandalous at the order, however. Dear heavens—

"You go too far." Did she actually speak it? Had her mind finally dredged up some common sense and come to her rescue?

"You leave me no choice. I cannot risk your stealing away again."

"You have my word I will not."

"A woman who expects me to break my word to Sansoni will not keep hers to me. Now cooperate unless you want me to force you to obey."

She reached behind her back and released her dress's hooks. It only took a minute to drop it off and lay it on a chair. The light was not so dim as to cloak her. She actually wished she wore stupid stays. She suspected he could see more than he should beneath her simple chemise.

She approached the bed and climbed onto it, trying not to expose too much, excited because she suspected that she did. She laid on her back and looked up at him. Silence hung in the air for a long pause.

"What are your intentions, Lord Elliot?"

He laughed again. Quietly. Darkly. "This is not a good moment to provoke and tease, Miss Blair."

Suddenly he was bending over her. Hovering. Her heart began racing. His shirt billowed near her face. His scent assaulted her. His size dominated her. A terrible, wonderful anticipation titillated her. Her breasts grew sensitive and—

He took her left arm and moved it near the iron bars of the bed board.

"What are you doing?"

He threaded the shawl between the bars. "Making sure that you do not leave. I do not need much sleep but I cannot stay awake for two nights."

"This is excessive. Ignoble. I demand that you—"

"This is necessary. It is either this or I sleep beside you. Would you prefer that?"

She stared up at him. He paused in making the knots and looked down. Her heart rose to her throat.

"Would you?" he repeated. It was a frank, sincere question. An invitation to allow the sensual pull to have its way.

She swallowed. "Of course not."

Even in the dim light, she saw his smile. It was that slow, confident one. He returned his attention to the knots.

Finally he moved away and straightened. She yanked at the bond. There was no slack at all in the knots. She turned on her side and pried at the thick wad with her other hand.

"Feel free to try and untie them. You will not be able to. You can sit. You can move. You can even stand. You can use the chamber pot. But you cannot get away. Better to use the time sleeping."

He knew, damn him. She could tell that he did.

"You look very beautiful there, Miss Blair. Very lovely, and vulnerable and, dare I add, . . .submissive?"

That quiet laugh again. Then he was gone, leaving her to argue with herself for the rest of the night over just how vulnerable and submissive he had made her.