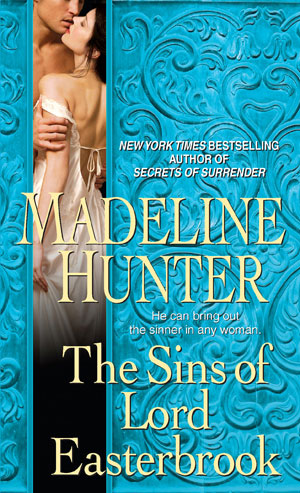 The Sins of Lord Easterbrook

"A delightful 1800s romance with plenty of steamy passion. . . . Hunter has concocted a satisfying tale of desire, deception and privilege." —Publishers Weekly

A passion that will not be denied.

Seven years ago, Leona Montgomery's sensuality was awoken by a mysterious young adventurer full of dark chaos and sinful inclinations.

When she meets him again, their attraction reignites immediately, but he is much changed. Arrogant, masterful, and determined to seduce her, he now appears to have leashed the chaos and tamed the darkness.

Excerpt from The Sins of Lord Easterbrook 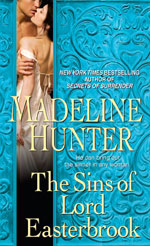 He regarded her a long while, as if he expected her to speak first. It unnerved her, to suffer his gaze like this. The chamber seemed to shrink, bringing him closer even though neither of them moved.

"This plan, to make introductions and such," he said. "It will be much more effective if you move to Grosvenor Square."

She had not expected such a blunt overture so soon. "I am content here, and I would never impose on your aunt."

"She would not consider it an imposition, I guarantee."

"All the same, joining your household would be too much intimacy with a woman I barely know."

"There would be no intimacies that you did not agree to. It is a very big house."

"I must decline your generous offer."

He took it well enough. He paced aimlessly around the shrinking chamber. "The introduction to my brother Hayden will have to be delayed a week or so. His first child will be born any day now."

"I am sorry that you even raised the matter with him under that circumstance."

"He did not mind. In the meantime, invitations will begin arriving for you tomorrow. More than you can accept. If you have any questions regarding which should take precedence, I will gladly help you with that."

"Do you have the necessary wardrobe? If not, I will—"

"I cannot allow that, so please do not offer."

He took the second rejection very well too. Leona stood her ground and tried to ignore how he managed to dominate what had become a tiny space now, one where she stood in the center and his casual stroll arched around her.

"You are nervous, being alone with me," he observed. "There is no reason to be afraid."

"No? You declared your intentions explicitly when we met in your house, and they are not honorable. Now you are proposing things that are intended to lure me."

"Does that matter so much? Whether they are honorable or not?"

"Of course it matters. A marquess may sin with frequency and impunity, but I am not so privileged."

"As a woman of the world you know that these matters are so normal and so accepted in every society that calling it a sin is joke. If I am luring you, it is to more than a casual seduction, in case you do not understand that."

"I was not born or raised for what you offer, no matter how comfortable and lucrative the situation may temporarily prove to be."

She spoke with more determination than she felt, and not only because he made her stupid heart jump the way he always had. As Easterbrook's mistress she might accomplish all that she had come to do here in London, and in very little time.

Even if he tried to thwart her, even if her worst suspicions about him were correct, she would be better placed to learn it all if she were in his house and his bed. She might even find that notebook if she could move freely in his home.

Her own ruthless calculations shocked her. But the insidious arousal that he inspired urged her to grab the excuse.

She trusted that he had heard the finality in her voice. She assumed that he would take his leave.

He did not. Instead he contemplated her with that direct examination, much as he had during their last meeting.

"Why did you not marry? I do not believe Pedro ended the engagement as you said."

"Oh, he ended it. Thoroughly." The sudden turn in topic vexed her. He had a talent for throwing her off balance.

"But you did not mind so much. Just as you do not mind my lures so much now."

Her temper cracked like a whip. "How dare you presume to know my mind? Now or then? I was a young woman alone, orphaned, with no fortune and no security, and I was not so stupid as to ignore that Pedro offered both."

"That is not the same thing as wanting to marry him. It may have frightened you to be left to your own devices, but you were not heartbroken to be free of him."

"You are an insufferably arrogant, conceited man. You think that your birth gives you the power to read the hearts of others like a god. My father taught me the value of pride but my mother taught me about the sins it breeds, and your presumption of omniscience is close to blasphemous."

"I do not claim to know your mind. Your story does not ring true, that is all. Pedro might have ended the engagement because of your father's failing business. However, he could not use that excuse because that would not be enough reason to end it with honor."

She could barely maintain her composure, and she proved incapable of holding her polite stance. She paced out her growing anger, back and forth, in strides too long and fast.

"How wasteful that you have turned your brilliant mind to my story, Lord Easterbrook. Surely there are more pressing matters to occupy you. Of course, you are correct. Pedro did not admit the true reason. He found a better one to give the world. If you must know, that reason was you. He accused me of more than a silly flirtation, and he was believed."

He watched her furious words pour out. He cocked his head and made a small frown. "Pedro had no proof, however. There was none to have."

"Do you think anyone cared, after they heard his tale? Do you think he was so stupid that he could not tell that something had happened between us? Do you think Branca could stand against him when he browbeat her to learn what he needed? You sought me out alone again and again, and were careless with my reputation. There was evidence enough for his purpose, and with my father dead there was no one to defend my honor."

He caught her arm as she strode by, stopping her. She did not fight his hold, but she refused to look at him.

"If you were held up to scorn, I apologize, Leona. If you wanted that marriage, I am sorry." His fingers cupped her chin and turned her face to his own. "Did you want it?"

Saints, but the man was impossible. "And if I say no, not really, does that mean your guilt is gone?"

"First sin, now guilt. I do not think that way. Nor do you."

"You have no idea how I think. Now, please, the day has tired me and this conversation has me too vexed to be hospitable. Show some kindness and leave me to compose myself."

He did not release her at once. She sensed that invasive attention sliding around her, as if he sought to truly know her mind. She protected herself as she always had. His expression hardened in response, like a wordless battle had just been fought to a draw. Finally he let her go and stepped away.

Severe now, he strode to the door. He faced her again before he crossed the threshold.

"I may not know your mind, but I know enough and I'll be damned if I will pretend that I do not. I know that you also sought me out. I know that desire binds us so powerfully it affects every word and every motion and even the air we breathe. I know that I'm glad that pompous ass did not get you. And I know that the only sin I committed with you back then was not taking you when I could have."