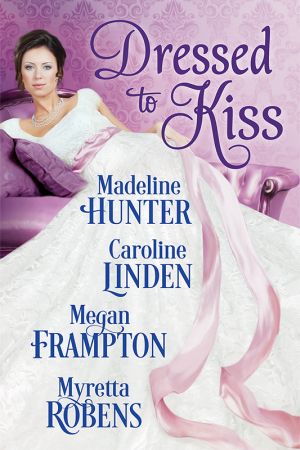 Once renowned for creating the most envied gowns in London, Madame Follette’s dressmaking shop has fallen far out of fashion. The approaching coronation of King George IV offers a chance to reclaim former glory by supplying stunning new wardrobes to the most glittering society in Regency England. In the face of long-held secrets, looming scandals, and the potential ruin of their shop, the dressmakers of Follette’s are undaunted, not even by the most unexpected complication of all: true love.

The Duke’s Dressmaker by Madeline Hunter

When the Duke of Barrowmore walks into the dress shop, Selina Fontaine assumes her secret identity will be compromised. Four years ago this man’s brother abandoned her to scandal, and she holds the duke responsible. To her amazement the duke is more interested in pursuing her than exposing her, however—and that pursuit soon becomes seductively pleasurable.

A Fashionable Affair by Caroline Linden

Madame Follette’s is Felicity Dawkins’s birthright; her mother founded it, and now she runs it. She’s fiercely committed to making it the most exclusive modiste in London. The Earl of Carmarthen also has big plans for the shop—he wants to buy it and tear it down, to make way for a grand new boulevard of shops. One way or another, he’s determined to persuade Felicity…not only to sell her shop, but to explore the passion that sparks between them every time they meet.

No Accounting for Love by Megan Frampton

Miss Katherine Grant is a lady’s companion, one whose number of dishonorable offers (six) greatly outweigh her honorable ones (zero). Now tasked with making certain her charge, Lady Euphemia, does not contract herself to someone inappropriate, she finds herself inexplicably drawn to Mr. Henry Dawkins, the inappropriate gentleman Lady Euphemia wants to charm, who keeps the books at Madame Follette’s. But it seems that Henry only has eyes for Miss Katherine Grant.

The Colors of Love by Myretta Robens

Delyth Owen’s exuberant passion for her new job as a dressmaker at Madame Follette’s is matched only by her love of diverse, vibrant, and frequently unfortunate color combinations. Simon Merrithew, the pseudonymous author of a well-regarded fashion column, is horrified by the gown Delyth creates for a friend, and suspects her motives. He sets out to uncover her duplicity, but instead, he uncovers genuine joy and discovers the colors of love.

Excerpt from The Duke’s Dressmaker      Chapter One 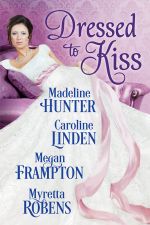 A bright reflection blinded Selina Fontaine while she placed some fashion plates back in the window of Madame Follette’s dressmaking shop. Shading her eyes with her hand, she looked to see what sent that beam of light in her direction.

A large coach had stopped in front of the shop. Its door, ten feet from the window, bore a gold and red escutcheon. The afternoon sun’s rays set that heraldic carving ablaze and the glare ricocheted off the glass in the coach’s carriage lamps.

She did not wait to see if the coach had passengers. She strode through Follette’s street-front shop, to the door that led to the dressmaking chambers behind it. Once there she entered a fitting room where her patron, Lady Giles Woodville, waited.

“I am sure these will be perfect,” Lady Giles said, sweeping her hand over the fashion plates she had chosen for her new wardrobe that were spread out on the table in front of her. “The dress for the coronation is very fine, and unobjectionable. Lady Clarice was kind to recommend you.”

Selina quickly stacked the plates. “If you come in the next few days, I will take measurements and we can discuss materials.”

“I thought we would do that now.”

“I believe your coach has arrived already. The hour is later than we thought.” It had taken this pretty child three hours to choose the plates. Selina had fought her every step of the way to make sure she did not pick the flamboyant designs that appealed to her. She might address her patroness as Lady Giles, but in her mind she dealt with a schoolgirl named Edeline, much as Lady Giles’s governess had, not so long ago.

Lady Giles, young, fair, pretty, and spoiled, wavered between amusement and annoyance that a dressmaker dared interfere with her fun. She chose amusement. “The carriage can wait, Mrs. Fontaine. Bring me the materials you recommend for the dinner dress and the court dress.”

“It is not the same carriage that brought you. That was why I thought—”

Selina went behind a curtain to the alcove where they kept samples of fabrics and trims from the best shops. Many patrons preferred to visit the drapers and warehouses themselves, but some appreciated this convenience.

She chose quickly. All the while she tried to calm herself. Just because the state coach had come for sweet Edeline it did not mean anything. It had probably been out and about in town for other purposes, and simply stopped by to collect some pretty baggage before going home.

Not for the first time she doubted the wisdom of accepting this commission, however. She had done so against all of her better judgment. She had only agreed to it because the shop needed both the work and the prestige. The owner, Sophie-Louise, had given her sanctuary and employment when she badly needed it. Loyalty dictated she take any work that would help Sophie-Louise’s daughter Felicity in her current quest to enhance the shop’s finances.

Nor did she have a good reason for not accepting. None she could share with Felicity, at least.

She dug through some samples of trims and plucked out several that could embellish the fabric. Muffled voices came to her, as if a hum of quiet chatter had erupted among the women looking to buy ribbons and lace in the street-front shop. Hopefully that meant another potential patron had sought them out, the sort of woman of the haute ton who would cause others to nudge and whisper.

Steps sounded in the chamber behind her curtain, the one where Lady Giles waited.

Not delicate steps. Boot steps. A man had entered.

“Oh, I did not expect you to come here,” Lady Giles exclaimed.

“I was on my way back from Whitehall and directed the coach here to bring you home.”

“I am not really done yet,” Lady Giles said.

“I assume not, if you left me waiting.”

Selina’s pulsed raced. Desperation wanted to give way to panic. She had only heard that voice once before, but she would never forget its terse, superior, arrogant tone. She definitely should have found a way to reject this commission.

She peeked through the curtain, hoping she was wrong.

The Most High, Noble and Potent Prince, His Grace Randall, Duke of Barrowmore, the man who had ruined her life and her dreams in one short day, the man she would not mind strangling with the length of silken cord that she held, stood ten feet away.

“Are these the fashions you chose?” Rand reached for a stack of plates on the table where Edeline sat in her chair.

“Thus far. I hope you like them. Mrs. Fontaine advised me on each one, and I accepted her judgment as you told me to, even though I find most of them far too plain.”

He sat across from her, and flipped through the plates. It was a hell of thing that he was doing this, instead of his sister Charlotte, or better yet, his brother Giles. Only the former was in the country pampering her husband who had managed to slice himself while practicing with a sword, and the latter had taken himself to hell knew where to escape his debts. So, in addition to his considerably more important duties, he found himself acting as arbiter of the wardrobe of his brother’s young wife.

Edeline was lovely, sweet, gentle, and usually demure. Who would have guessed that she had no taste? Certainly not he, until he chanced upon her displaying a new dress to a friend the day after she received it. The modiste who made that dress should be executed.

The rest of the new wardrobe looked just as bad. Embellishments too distracting, necklines too low, colors too bright—It turned out sweet Edeline had never been let loose at a dressmaker’s before. Any refinement in her clothing up until now had been the result of her mother’s careful decisions. Unfortunately, this spring Edeline had demanded sartorial independence and her mother had given it, since her attention now centered on the next daughter to be married off.

The entire enterprise had been a very expensive disaster. The bills would start arriving soon, not that Giles was in town to pay them. Not that Giles could afford to pay them, no matter where he was. Giles was another irritation and distraction that Rand did not appreciate.

Regarding Edeline’s wardrobe, apparently a firm hand was needed. Fate had decreed it would have to be his.

“That is the coronation dress,” Edeline said, pointing to a plate he uncovered.

A movement stirred the air behind him. A human presence warmed his shoulder.

Edeline looked over his head. “Ah, there you are, Mrs. Fontaine. Are those the fabrics you recommend? Put them here, so the duke can see them.”

A hand reached around and set a stack of cloth on the table in front of him. He looked at it, then at the plate, then back again. “So this would be for the dress proper, and this for the overdress?”

A very small part of him stood at attention. It had been a nice voice, deep and smooth. Mature and sensual. Its timbre momentarily distracted him.

The hand placed another stack in front of him. She had nice hands too. Elegant, with thin, long fingers. Young. “These are for the carriage ensemble, and these”—yet another stack appeared—“for the dinner dress.”

“There are more plates here,” he said.

“Materials of this quality can overwhelm the senses. I prefer to ask my patrons to choose a few at a time.”

That made sense. Already the colors and textures created confusion. So did that voice. It kept sending rivulets of curiosity into the stream of his consciousness.

Some men possessed an expertise in fashion. He did not. He could only claim to know when a woman’s garments did not reflect her status and enhance her beauty. Nothing shown to him thus far fell into that category. It appeared Mrs. Fontaine knew what she was about.

Thank God he would not have to make time for this in the future.

“Are you happy with Mrs. Fontaine’s choices?” His tone dared Edeline to object. He had warned her that if she purchased anything else at all inappropriate he would send her to the country for the duration of the Season and the summer.

“Then let us go.” He stood and offered his hand.

Edeline accompanied him to the door. “I will come tomorrow to be measured, Mrs. Fontaine.”

That voice nudged at Rand again. Something about it . . .

He turned to see the woman, in order to issue the command that would place the whole of this wardrobe into her capable hands.

One glance at her dark hair and blue eyes and her distracting, well-endowed bodice had his mind racing, searching for a thought that kept slipping away.

Suddenly an old memory flashed, and brought clarity with its light. He peered hard at the dressmaker. Hell yes, it was she. He was certain of it.

Mrs. Fontaine was really Selina Duval, the seductress who had almost got Giles to the altar four years ago.