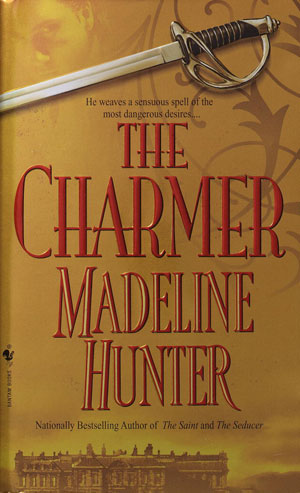 "With its rich historical texture, steamy love scenes and indelible protagonists, this book embodies the best of the genre." —Publishers Weekly

Sophia resents this man who high-handedly interferes with her life--a life in which she hides from the past. Worse, he seems to offer an intimacy that she dare not accept--until the night when he skillfully seduces her, peeling away the defenses to her heart as artfully as he does the layers of her clothing. As Sophia falls under the spell of his erotic charms, and Adrian finds himself unable to resist her passionate response, they embark on a dangerous affair. An affair that will either destroy them both, or prove the one thing that can save them when mysteries from the past reach out to entangle the present.

Excerpt from The Charmer 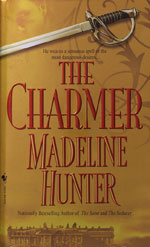 Sophia cradled her spinning head in her hands. She had drunk a glass or two more wine than normal tonight, but nothing to deserve this misery.

"Is he still there?"

Jenny cracked open the door and stuck her nose to it. "Yes, sitting by the hearth like he has a right to be here."

Sophia gestured to the two women mopping up the water around the tub. "Leave now and go to bed. The rest can wait until morning."

Lisette and Linette bustled to the door. As they slipped out Sophia caught a glimpse of the man sitting amidst her hounds.

Adrian Burchard. She knew of the Burchards. Randall Burchard, the Earl of Dincaster, had been a friend of her father.

The only thing that she knew about this particular Burchard, however, was what she had learned from Jenny. He was here on an errand from the King, no less, to bring her back to England.

"I do not think that he will go. He said that he would wait until you were well enough disposed to speak with him."

Sophia pushed Jenny aside and stuck her own nose to the crack. Adrian Burchard drank her wine, gazed at her fire, and scratched Yuri's ear. It was a wonder he had not removed his shoes. He cut a stunning figure with his dark tousled hair, dark eyes and black evening dress. Many women would not mind finding him ensconced in their chambers.

He possessed a compelling presence that affected her even in her pitiful condition. Still, he struck her as somehow fraudulent. The cut of his clothes and the manner in which he lounged announced his Englishness. He exuded an English aristocratic breeding that could not be faked. But . . . his face, yes, that was it. There was something suspiciously un-English about his face.

He did not resemble the fair-haired Earl of Dincaster. This man had thick, wavy, black hair, and very dark eyes, deep-set and shaped the way they are in Mediterranean countries. The contrast with his fair skin created a slightly unnatural appearance. There was something foreign about his mouth too, a hard definition that gave it a cruel aspect.

She could not shake the impression that if he changed his clothes, demeanor, and a few physical details, Adrian Burchard could pass for a Spanish prince much more successfully than that rapscallion Stefan passed for a Polish one. Which was peculiar because while Stefan might not be a prince, he most certainly was Polish.

The more she peered, the more familiar Burchard looked in ways that uncomfortably pricked at her recollections. She tried to brush aside the thick clouds that obscured the events of the night. It was extremely disconcerting to realize that several hours of your life had passed without your awareness of them.

Jenny held up some stays for her attention. "Will you be feeling well enough to dress now, my lady?"

"I have no intention of getting fully dressed again to greet him. Fetch my violet undressing gown, do something with my hair, and throw a shawl over my shoulders. If he is shocked, I do not care."

"Oh, I do not think you could shock him," Jenny mused while she pulled open doors of armoires. "After what he has already seen, it would be peculiar if he was scandalized by a perfectly respectable undressing gown, wouldn't it?"

Well, now, that depending upon what it was that he had already seen.

"What do you think of him, Jenny?"

Jenny glanced to the door. "He is very formidable. He does not frighten the way your father did, but there is something to him that makes one want to put things in his hands, because he is sure to make it come out as he intends. And he is every inch a gentleman. Charles said that while he carried you up here you were partly exposed, and not once did Mr. Burchard look."

Sophia's unsettled stomach kicked in outrage. Through some bizarre misadventure, this stranger had seen her partly undressed.

"And he can be very gentle, my lady," Jenny continued while she tried to tame Sophia's curls with combs. "He carried you to the bath like a baby, and when you got sick he assisted and showed no dismay."

Jenny pinned her curls back and encased them in a thin net. Sophia rose to don the violet satin sack gown.

Gathering the tattered shreds of her dignity around her, she made as grand an entrance into the next room as circumstances permitted.

The effect, if any, was wasted. Adrian was bent over Yuri's prostrate, panting form, giving a good scratch to the stomach slavishly begging for attention.

Sophia waited. He had heard her entrance but was pretending he had not. He planned to make this a contest. She really was not in the mood, even if his dark looks left her mouth dry.

He finally acknowledged her. Rising, he snapped his fingers and pointed Yuri back to his place by the hearth. Sophia did not miss the symbolism. Your household is already mine to command, the gesture said.

He gave her a sharp assessment with those wonderful eyes. His expression implied that he expected to find the next conquest quick work too.

He advanced and she presented her hand. He bowed over it. "Under the circumstances, perhaps we should start at the beginning and repeat the introduction, Duchess. I am Adrian Burchard. You are feeling better? I took the liberty to ask that some food be brought up. It will help if you eat something."

Tea and cakes waited atop a table. He guided her over, sat her down, poured her tea, and settled himself several feet away. Masterfully.

"Please eat something." It wasn't a request. Not really.

She reached for a cake in spite of herself. She nibbled and drank a bit of tea under his watchful approval. A silly, still-inebriated part of her wanted to glow with delight that he was pleased.

A different, sensible part, the part that had developed a gargantuan headache, knew what he was doing. He was taking her in hand, as if she was some dimwit.

"You are one of the Earl of Dincaster's sons, are you not? I met your parents, years ago." She was amazed that she got the words out. He was so handsome that she couldn't concentrate. She had to force herself not to stare at his face. Close like this, she found it astonishing in its severe beauty.

He possessed a square jaw and defined cheekbones and his eyes positively glowed in the candlelight. His black hair fell carelessly about his forehead and face and collar, but not in the carefully mussed styles seen in drawing rooms these days. Rather it seemed to really grow that way because nature decreed it be a little wild.

Tell me, Mr. Burchard, as I have always wondered. What is it like to be so beautiful that hearts skip when you pass by?

"I am his third son, after my brothers Gavin and Colin."

Third son. After the "heir and a spare". Lady Dincaster had been as fair as her husband, Sophia recalled. She examined Adrian's dark, foreign appearance with new interest.

"You have a letter for me, I believe," she said, barely swallowing a tactless query regarding his legitimacy that wanted to blurt out.

He extricated a small missive from inside his frock coat. Sophia noted the royal seal.

"The King was surprised that you did not return to England upon your father's passing. He summons you at once. It would be his pleasure to welcome the newest peer to her position."

It appeared that they were going to talk about sad, complicated things.

She found him a tad less attractive all of a sudden.